Articles How to photograph Bee-eaters

How to photograph Bee-eaters

The best time to take pictures of Bee-eaters is after they have returned from migration.  Thery are active all May and June preparing for future nesting and often mating. 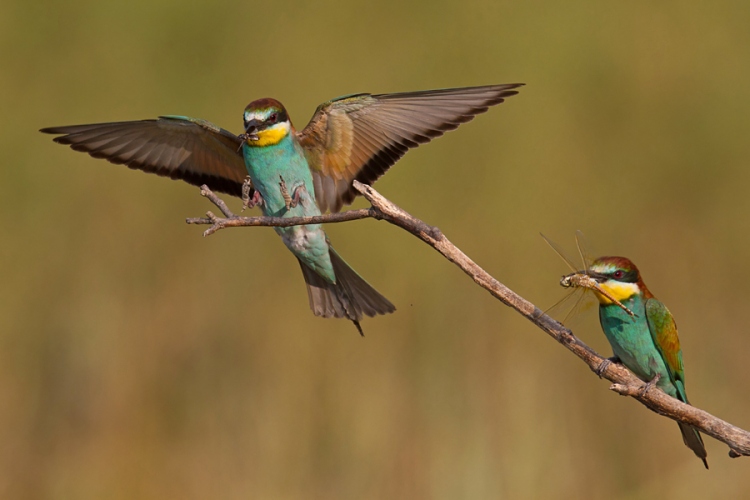 Right after their return from migration, the Bee-eaters begin to court each other with wedding games, and to prepare for future nesting. Pairing courtship may vary by two to three weeks and its duration varies for each pair. As part of this process, the males often bring food to the females, comprising of different butterflies, dragonflies and other small insects. Usually, the female stands perched on a branch, bush or tall grass next to the colony, and the male approaches her with the insect and gives it gently to her. This may be repeated many times a day with high frequency, which makes it convenient for taking pictures.

If the perches next to the bee-eaters’ colony are not enough, the different pairs and male birds often compete for a perch and this is an opportunity for taking action photography of landing, staggering or fighting birds. We put the appropriate perches next to the colony, in order to stimulate them to land close to the hide, where we want them. After brooding begins, bee-eaters’ activity decreases and they get busier with bringing food to the little ones, rather than to show off on the perch near the nest.

The best time to take pictures is 2 hours after sunrise and 3 hours before sunset. At those times the lighting is soft, the tones are warm and emphasize the vivid colors of the birds. Bee-eaters are active all day long but the distribution of light and shade might be burnt under the midday sun. When it is cloudy, lighting is also appropriate. Then we have the opportunity to take pictures all day long and the lighting is soft.

Bee-eaters are not very timid and they begin to perch within 15 minutes after we have entered the hide. However, it is desirable to enter the hides earlier in order to be sure that when the right lighting and moment come, we will be ready. 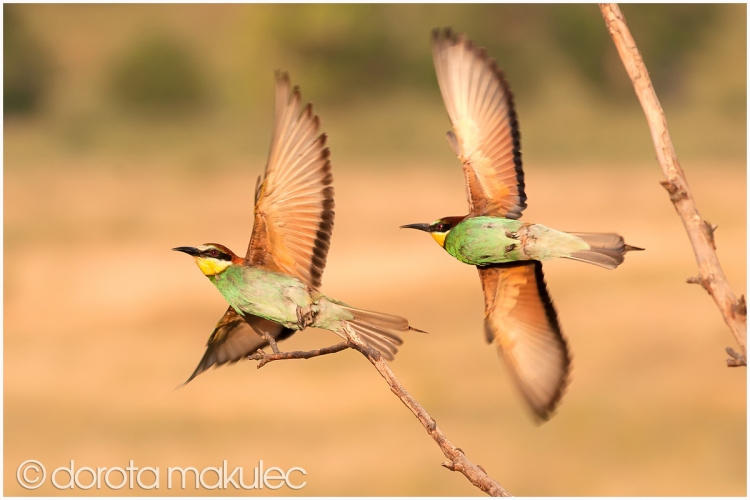 How to behave in the photo hide?
Do not show the lens too much outside the hide. Do not make sudden movements to the left and to the right. If you want to take a picture during flight, consider the movement direction and shoot when the bird enters the frame. If you want to take a picture on the perch, you should focus the branch in advance and start photographing shortly before the bird lands. Shoot in short bursts of 3 - 4 shots. The long series of shooting are not recommended because the sound may scare the birds.

The best shots are taken when the bee-eaters land on the perch and spread their wings, or when the two birds court each other and give each other insects. For this purpose, “hold” the perch in frame beforehand. Usually, the same birds land on the same place on the twig.

Tripod
Bring and use your own tripod. In this way you won’t make unnecessary movements with the lens, your hands won’t get tired and you won’t scare the birds away with too much movement.

Clothes and temperature
During spring and summer, it sometimes gets very hot, so wear thin cotton T-shirts and light trousers. It is desirable that the T-shirts are dark-colored.

Preparation
Before entering the hide, you should visit the toilet. Leaving the hide during the day is very likely to scare the bird and it won’t come back nor perch in front any time soon. Have a bottle prepared in case of an emergency. During the day, drink less water and eat light food such as biscuits or waffles, to avoid having to get out. 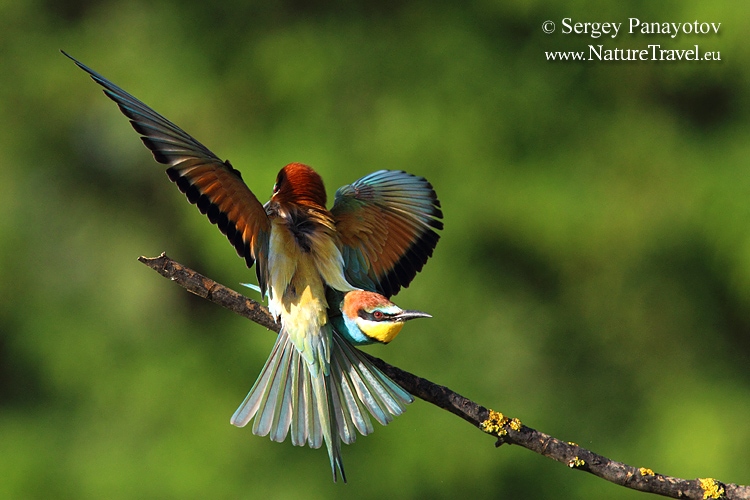